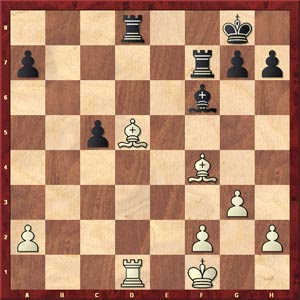 I made some predictions about how the Candidates matches in Elista would turn out, so let's have at a look at how I'm doing. I made them after round one, and we've now reached round four with just two games to go.

I said Aronian to beat Carlsen - Aronian currently leads 2½-1½ so on paper that one looks on course. However, Carlsen showed what he could do in round three, so there could be mileage left in this match. It has certainly lived up to its billing. I would like to see these guys go head-to-head over 10 or 12 games.

I said Shirov to beat Adams, but Mickey leads 2½-1½ after Shirov blundered horribly in the fourth game (see the diagram: Shirov played 24 Be3?? allowing 24...Kh8! when 25 Bxc5 would have been answered 25...Rfd7 pinning and winning the d5 bishop). Anonymous teased me thus: "I see you didn't factor in Shirov's ability to make ridiculous blunders ;)" Good one! Actually, it is a serious point: Shirov has had a few tournament disasters in recent years, as well as the odd one-off aberration (remember that terrible loss he had to Peter Wells in Gibraltar last year when his knowledge of Tromp theory was found wanting?). Anyway, I don't mind being wrong with this particular prediction. We just don't want any 'Kasimjanov moments' from our boy. Remember how hard he found it to defend Black in Tripoli? And overlooking a FIDE championship winning move? I wonder if Mickey ever wakes up screaming "how did I miss 42...Qe4!!?".

I said Ponomariov to beat Rublevsky, but the portly Russian leads 2½-1½ (thanks to IM Tom Rendle for pointing out my original mistake in putting 3-1). So it looks as if I am going to be way wide of the mark there. Slapped wrist: this was down to a simple failure to do my homework properly. I described Rublevsky as the 'older man', which is true, but I just looked up his age and found he was only 32. Hardly Methuselah, is he? Larry Christiansen made the same mistake on the ICC commentary yesterday when he talked about Rublevsky being 'nearly 40'. I don't think we give Rublevsky enough credit for some of his successes. True, he has had a few failures along the way (e.g. the Turin Olympiad 2006 where his three straight losses cost the Russians dear), but his mega-victory in the 2005 Russian Superfinal (two points clear of Kramnik) and last year's win at Foros Aerosvit in Ukraine mark him out as one of the big guys (not just in terms of avoirdupois). Pono could still come through, of course, but he's going to need to raise his game.

I said Grischuk to beat Malakhov and it's looking good: Grischuk leads 3-1. It was a messy game yesterday, and I get the impression that Malakhov went wrong on move 21 when he should have played Rxc1 rather than Bxc1. I liked the way Grischuk won the first game but I've not been convinced by his play since then. Maybe he's just a top-class hacker. But it makes for great entertainment.

I said Leko to beat Gurevich - and he did. I said it was a 'no-brainer' - and it was. Nice to get something right now and again...

I said Polgar to beat Bareev but the Russian leads 3-1. By rights Judit should already be on the plane home. Her play has been very disappointing. I agonised over my prediction, mainly because Polgar is rated so much higher than Bareev. But, as has been shown a number of times in the past, ratings count for less in a head-to-head contest. I mentioned Bareev 'doing a Khalifman' and there may be something in that. Playing as a semi-professional may have given him a new lease of life. It's not over yet but the prospect of a woman winning the world championship seems more remote than ever. As for Bareev: his future opponents will underestimate him at their peril. He looks in very good shape.

I said Kasimjanov to beat Gelfand, but the jury is still out on that one. Four straight draws. Ejh comments: "Gelfand currently ahead in the 'Chessplayer Most Obviously Looking Like A Single Man' competition...". Cruel but... cruel! Don't forget that Gelfand is married to an ex-girlfriend of Mickey Adams (Zoe). Anyway, I personally think 'Chubby Checkmater' Rublevsky looks more 'single' than Bob Gelfand...

I said Kamsky to beat Bacrot: correct, but I didn't think it would be quite as emphatic as 3½-½. I haven't quite made up my my mind whether Kamsky played really well or Bacrot played really poorly, but I think I veer towards the latter. Although the Frenchman was a huge talent as a junior, it has always slightly mystified me that he came by such a high rating (he's been 2720+) without chalking up any stellar international tournament victories. Checking back, I found he shared first at the 2005 Karpov Poikovsky, but his other super-tournament appearances have been rather modest. His performance in the final game in Elista, with an apparently rock-solid kingside pawn structure melting away to nothing inside seven moves, was very poor. But we have to give great credit to Kamsky who appears to have lost nothing of his matchplay ability after his long lay-off. Let's hope Kasparov was watching closely - still not too late to make a comeback, Garry.

Overall I'm impressed by the Elista event which has the look and feel of an old-time Candidates event. The matches could do with being a bit longer, and it would have been better to have matchplay all the way through to the final match, but we must be grateful for small mercies. I'm not sure we've seen anything yet to cause the Three Vs (Volodya, Vishy and Vesko) to lose any sleep as regards what happens in Mexico. But maybe Peter Leko is on the brink of a career break-through.
Posted by John Saunders at 11:15