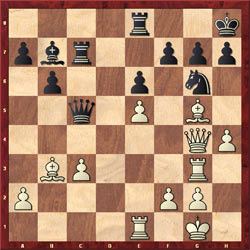 (Diagram left shows the position after 23...Qc5 from the game N.Pert-Aleksandrov, Euro 2007)

Now, I know what some of you are thinking: the above title may seem rather tactless or even tasteless in view of what happened the last time an English chess team went abroad. But I am only following the English Chess Federation’s robust lead when they titled their Dresden press release “‘Team England’ Launch an Assault on the European Chess Championships”. And let me reassure nervous readers that no innocent Belarussians were physically injured in the creation of this blog. The title refers to Nick Pert’s wonderfully brutal win against Alexei Aleksandrov. But I’ll get to that presently.

So far in my coverage of Dresden I have concentrated attention on mad gamescores. Bernard Cafferty spotted this one, which must rank as the maddest of the mad:

What’s the German for “you’re ‘avin’ a laugh”? I wouldn’t know where to start trying to repair a gamescore like that, though there is something faintly reminiscent of a position from the Petroff in the minor piece configuration around move 6. But surely there is a potential grandmaster of gamescore recovery out there somewhere who could solve it in a trice. Bernard suggests that a prize be offered for anyone who could crack the puzzle. He suggests that the Euro 2007 organisers put up the first prize, which would be an express ticket to Dresden with the message “Komm schnell!”.

Here's my own idea: FIDE could consider running a ‘European Gamescore Solving Championship’ to run concurrently with the main event. As soon as a chess round ends, all the rubbishy gamescores could be handed over to the solving championship competitors to fix in (say) two hours. Not only would the organisers then not have to pay people to unravel the scores, they could even charge them a $200 entry fee, ramp up the hotel charges, make a handsome profit – and end up with a clean set of gamescores. How come those clever people at FIDE didn’t think of that before me?

In truth, the event which styles itself the European Individual Championship is not really worthy of the name. In many sports, such a championship ranks only slightly below a world championship but that is a long way from being true in chess. Most elite players give it short shrift because of the poor conditions and FIDE time limit (for any non-chess readers out there: ‘FIDE’ is a chess jargon word which, when used adjectivally, roughly translates as ‘silly’ or ‘ridiculous’). True, it counts as a world championship qualifying event, but even then the promised events to which it is a ticket do not always take place.

However, viewed purely as a tournament which attracts large numbers of 2600+ grandmasters and strong chess tourists, Euro 2007 is a worthwhile and important event for young or promising players looking for tough competition. To this end, the English Chess Federation has done very well to get together a squad of players who should derive great benefit from the opportunity. For this, all credit to the ECF International Director Peter Sowray and other officials behind the initiative; and also posthumous credit to my old friend John Robinson whose incredibly generous bequest to the ECF helped make the squad’s participation possible.

I won’t go into any great detail about how each of the squad is faring. Suffice to say that most of them are doing OK at the time of writing (after round three). But the following game stood out:

(Diagram at top of the blog)

An excellent win for the young English grandmaster.
Posted by John Saunders at 11:47