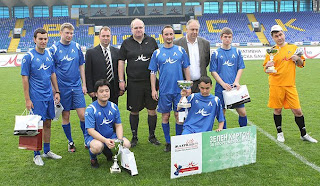 Chess has been rocked by another drug scandal. Yesterday, after the traditional MTel Masters soccer match, where the chessplayers line up against a local side, Vasyl Ivanchuk once again refused to take the obligatory post-match urine test prescribed under the rules of the Bulgarian Football Association. He faces a lengthy ban...

... don't worry, I'm only kidding. But the joke is not original. What actually happened was that, as Ivanchuk limbered up for the game, the 'team doctor' approached him and warned, "After the match, we have a urine test laid on for you!" Ivanchuk is said to have 'appreciated the humour'. Hmm, I wonder. What's the Ukrainian for "are you taking the p***?"
Posted by John Saunders at 17:08 2 comments:

Having taken the mickey out of the London Evening Standard in my previous blog entry, I'm only too pleased to retract everything in this one and say "well done, Evening Standard". Leonard Barden's daily print column has been restored (though at the cost of withdrawing the online column, it seems. Oh well, can't have everything). The newspaper was remarkably quick to respond to readers' opinions.
Posted by John Saunders at 15:23 4 comments:

What's with all these people suddenly saying sorry? Is it perhaps a symptom of swine flu or is it an ailment in its own right? The fat cats of major banks were the first people to go down with 'sorry flu' with their profuse apologies for cocking up the world's economy and paying themselves unjustifiable mega-bonuses (I couldn't help noticing that the cure for the disease didn't extend to paying any of the money back).

Now the disease (apologitis ratbagiensis, to give it its full Latin name) has taken hold at Westminster as afflicted MPs and party leaders vie with each other in expressing their oh-so sincere regrets for helping themselves to rather more of the tax-players' money than they should have. It's clearly a painful malady as the air rings with heartfelt cries of "it's the system that's at fault", "it was a genuine mistake", "I've already paid it all back", "the money was just resting in my account", etc, etc. No, wait a minute, that last one came from an episode of Father Ted more than ten years ago - but you get the general idea.

A few weeks back, lodged neatly between the bankers' outpourings of remorse and the politicians' mea culpas, there was another public airing of the five-letter 's-word'. I read this report online...

LONDON - The London Evening Standard launched a campaign today apologising to Londoners for its performance in the past, as the newspaper kicks off a three-week publicity attack ahead of its relaunch on May 11.

The print campaign, created by McCann Erickson, apologises to Londoners for losing touch, taking them for granted, and being negative, complacent and predictable. All of the executions begin with the word "sorry" and use the Standard's Eros logo.

The campaign comes in response to market research, commissioned by the newspaper’s new editor, Geordie Greig, which found that Londoners felt the paper was too negative and did not meet the capital’s needs.

The approach will be seen as critical to that of the former editor Veronica Wadley, who edited the Standard for seven years before its acquisition by Alexander Lebedev.

So, when 11 May finally arrived, what did the Evening Standard apologists actually do? Well, for a start, they reduced Leonard Barden's long-running and much-loved chess feature from five appearances a week to a solitary one (on Friday), though still publishing the other four online. It's at http://www.thisislondon.co.uk/chess if you want to read it and there is a comment box at the end where you can express your feelings about the situation (more and more people are doing so). Good to have it online but it is a retrograde step to remove it from the printed newspaper where it is much more likely to be read by occasional or casual chessplayers and where it has provided high quality enjoyment for tired commuters and valuable publicity for competition chess since the early sixties.

Only now can we chessplayers fully appreciate what the earlier report said about the Evening Standard "losing touch... taking [people] for granted... being negative", etc, etc. For us, things were rather better before the newspaper suddenly succumbed to a fashionable attack of 'sorry flu'. Given the Standard's admirable propensity for expressing sorrow, there is still time for them to do so again, whilst at the same time restoring Leonard Barden's column to the print version of their paper on every weekday as before. But there is no need for the newspaper to shell out further cash on an expensive publicity campaign. See the image above, where I have adapted the poster the Standard used earlier this month as part of their relaunch. In a spirit of reconciliation I'm prepared to let them use my artwork for free.
Posted by John Saunders at 09:20 No comments: 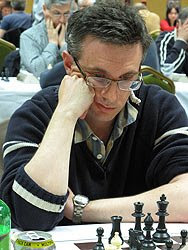 Whilst at the 4NCL in Daventry on Monday, I bumped into FM Jonathan Rogers of Barbican (see photo). Jonathan recommended to me his ninth round win against Mark Ruston which featured an attractive queen for two pieces sacrifice.