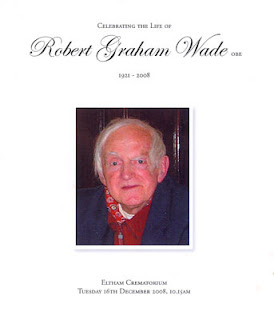 Obituary of Bob Wade (by Leonard Barden in the Guardian)
Posted by John Saunders at 17:03 No comments: 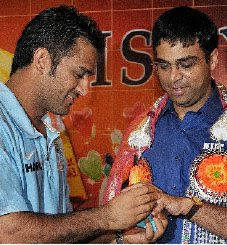 [The original story and photo here]
Posted by John Saunders at 11:42 3 comments:

Carlsen and the Candidates Debate

Just when we thought the world championship had sorted itself out... suddenly it’s all up in the air again. The latest news is that Magnus Carlsen has withdrawn from the Grand Prix cycle and this series of tournaments looks as though it could fall by the wayside.

Before going any further, perhaps I’d better state my prejudices when it comes to world championships. The important thing for me is that the whole thing ends with a one-to-one match. Thankfully they are back in fashion and I am glad of that, though I think they should play a few more games – 16 would be ideal. I found the old knock-out system, with its scores of rapidplay and blitz games, utterly abhorrent as a world championship system and as far as I’m concerned Khalifman, Ponomariov and Kasimdzhanov were not world champions (I always use the term ‘FIDE champion’ when referring to them), and Vishy Anand only became one recently. Though Kasparov was arguably wrong to break away from FIDE in 1993, he and his successors, Kramnik and Anand, still represent the ‘apostolic succession’ of world champions and I’m not prepared to be fobbed off with any inferior alternative.

So now, with the world title match system finally repaired, it seems that we must go through the pain barrier with the next tier of the championship. My strong preference is for a Candidates competition of 8-16 players. I think I would prefer a matchplay knockout of (at least) six-game matches rather than a tournament but the latter option is probably a lot easier to organise in this recession-hit world we live in.

Unfortunately the current qualification cycle – until this week – consisted of nothing of the sort. Instead, FIDE had cobbled together a ‘system’ which consisted of a watered-down version of their old knock-out world championship (called the FIDE World Cup) and a series of tournaments called the Grand Prix. The winner of each of these would meet in a match, and the match-winner go on to play a world title match with Vishy Anand.

Appraising this system, one finds a couple of plus points but rather a lot of negatives. One apparent plus point – and this goes for the old knock-out system too – is that it provides a good pay-day for quite a large number of grandmasters. By the same token, it was egalitarian and inclusive. But do we really need – and can we afford – the world championship to be quite so democratic? What is the point of giving a sizeable chunk of cash to people who are inevitably going to be knocked out in the early rounds of a qualifier? A complicated system of national and zonal qualifiers made sense in the days before we had the rating list but now everybody has a rating which, by and large, is trusted and accepted as a true measure of their strength. Given that we now have 30+ players rated over 2700 and a world champion on the brink of 2800, it seems reasonable to exclude anyone below 2700 from taking part in a world championship system.

The FIDE World Cup is an excellent tournament but far from ideal as championship qualifier to a play-off match. Like most chess fans, I enjoy watching the matches online and thoroughly enjoy the spectacle. But when relegated to being a qualifier for a Candidates event it makes perhaps a bit more sense. This seems to be what FIDE is now planning.

The Grand Prix series of tournaments has a number of advantages – one being the complete elimination of rapidplay and blitz play-offs – but I think there are a number of serious practical problems which are hard to overcome. One is that players have to fit four lengthy tournaments into their schedule which can’t be easy to do. But the really big practical problem is that FIDE has to organise and secure sponsorship for six different events worldwide. This would not be easy to do even if they were more competent than they are. We now learn that the Doha and Montreux events have been called off – one can speculate that they have fallen victim to the worldwide recession – so that rather underlines the problem. Looking back, we have to say that the whole concept was ludicrously optimistic.

Another major practical problem with the World Cup/GP system is how a dethroned world champion re-enters the system. Under the old-time Interzonal/candidates system, an ex-world champion (or unsuccessful challenger) would slot in at the Candidates stage. The lack of provision for this is a glaring hole in the World Cup/GP system. How was Kramnik supposed to re-enter the fray? He wasn’t in the GP, probably because it clashed with his world championship preparations and match. So presumably he was expected to take his chances in the World Cup. This just seems preposterous to me. Can you imagine a post-2000 Kasparov playing in one of these bun-fights? He baulked at playing in an infinitely more respectable and sensible candidates event in Dortmund in 2002 so one shudders to think what his reply would have been to an invitation to a Siberian slugfest. Any qualification system has to take account of world championship runners-up and allow them to re-enter at a level which is appropriate to their status and at a time which is fair and equitable.

I can fully understand Magnus Carlsen and others being disgusted with FIDE’s decision to change the qualification system in mid-cycle and have sympathy for the situation they find themselves in. But perhaps FIDE has finally woken up to just how rotten their system was and that for all manner of reasons it has to be replaced with a Candidates competition. One tournament, to include all the main contenders, should be relatively easy to organise and fund (even for FIDE). It was quite apparent that the overly ambitious and unwieldy GP series was coming apart at the seams so they probably had to do something immediately and of course this was bound to hurt those players involved in the GP - they have my sympathy.

Re the Carlsen withdrawal: looking at it another way, perhaps the Carlsen family have simply made a pragmatic decision. They have a legitimate grievance which effectively gives them a way out of the ailing GP cycle. Having exited, they can now concentrate their energies on parachuting Magnus straight into the Candidates. And why not? Magnus looks even more like a future world champion. Not only does he play chess like Garry Kasparov, he can politick like him as well. To be a world champion one must make good moves off the board as well as on, and this looks like a pretty good one.

So who will be the Candidates in 2010? Let’s assume Vishy successfully defends his title against Topalov/Kamsky, then we will have Topalov, Kamsky, the GP winner, the next World Cup winner, the nominee of the host country plus three other guys from the top of the rating list. So long as those qualifiers and nominees include Kramnik, Carlsen, Morozevich and perhaps Aronian and Ivanchuk, we should be assured of a competition that is reasonably representative of current world title contenders. The way we got here has been fraught with bad decisions, wrong turns and hurt feelings but finally we might be arriving at the right place. I did say “might”...

P.S. Has another Fischer record been broken? Magnus Carlsen, born 30 November 1990, withdrew from the Grand Prix on 5 December 2008, aged 18 years 6 days. Fischer made his first major competition withdrawal on 13 August 1961 (or thereabouts) when he withdrew from his match with Reshevsky at the age of 18 years 5 months 4 days old.
Posted by John Saunders at 11:59 3 comments: