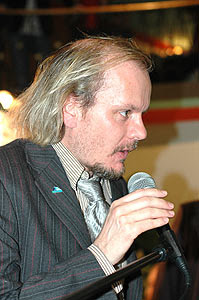 Ynojosa in the national press...

Round six saw draws all round for the leading group of six on 4/5, which gave a chance for yet more players to catch up. However, only one player managed to exploit the opportunity, namely Bogdan Lalic. The Croatian-registered grandmaster is the main danger as regards the return of the trophy to English hands this year (though he is not the only one - Manx resident German IM Dietmar Kolbus, whom I mentioned in an earlier blog, is on 4 and could yet win the title for the Isle of Man).

So the final week will start with Stuart Conquest, Nigel Davies, Danny Gormally, Mark Hebden, Gawain Jones, Bogdan Lalic and Lawrence Trent in the lead on 4½, with a further 11 players on 4 who are still in with a decent chance of the title.

The most notable story of the first week has been the performance of the tournament's youngest player, Felix Jose Ynojosa, who is 12 years 6 months old. Something tells me we're going to see and hear quite a lot of that name in the future so we'd better establish correct pronunciation right now - it's Ee-no-HOS-a (sound the 'h' as in the Scottish 'loch' - please don't imitate the dodgy pronunciation of the BBC reporter who interviewed Felix for BBC South-East). Felix has made quite a stir in junior chess circles since his arrival in the UK and he's now being coached by GM Nick Pert (for a photo of the two together, see this page on Nick's website).

Felix came to the UK from Venezuela with his family (his older sister Angelica also plays chess) a few years ago and nows lives in Berkshire. He is registered as an English player. This page on the Berkshire Junior website gives a good run-down on his latest achievements, while veteran talent-spotter Leonard Barden identified him as one to watch in his May 31 column in the Guardian, along with the two talented London-based 13-year-olds, Yang-Fan Zhou (also doing well in the British, having beaten IM Richard Pert in the first round) and Samuel Franklin.

Leonard Barden compared Felix's London Junior performance last Xmas with that of Nigel Short at the same age, and there is another near-parallel with the English super-GM in Felix's performance this week in Liverpool. In 1977 Nigel Short, aged 12 years 2 months, made national headlines by beating ten times British champion Jonathan Penrose in the third round of the British Championship. Short's round six score that year was 2½/6 whereas Felix, just 4 months older, has already chalked up 4/6. That works out at a TPR of 2418 so far, so he could be on course for an IM norm. Felix's progress has been very impressive. After a first round loss to Jonathan Hawkins, he displayed mature technique to defeat Dave Ledger, then drew games with Steve Barrett and IM Simon Knott. In round five he comfortably defeated the Indian player Venkat Tiruchirapalli. But in round six he went one better and defeated the highly experienced and dangerous IM Graeme Buckley... What struck me about this game was Felix's intelligent game plan. Buckley has a strong preference for tactical mayhem in his games, but Felix steered him into an innocuous system (Sicilian c3 transposing to Exchange French) where Buckley couldn't generate any tactics. By move 12 it was evident that Black was far less comfortable with the positional nature of the game than his young opponent and a slip on move 19 was instantly exploited by the 12-year-old. Felix won two pawns and liquidated to leave himself with a straightforward technical win.

This was actually Felix's second win against Buckley, whom he beat in the King's Head Rapidplay earlier this year on his way to first place with 5½/6. Later, at the May Richmond Rapidplay, Felix added another IM scalp to his belt by beating Malcolm Pein in the second round on his way to 4/6 in what was an extremely strong one-day tournament. He obviously has a huge talent. It will be very interesting to see how he fares in the second week.
Posted by John Saunders at 07:57 1 comment: 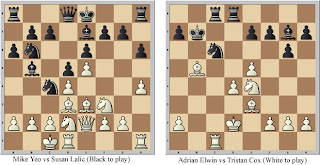 But, for every published combination, there are probably 1,000 unpublished miscombinations. I'll try to restore the balance by showing you what happened in the game shown in the top-right diagram. White is fairly well placed here. He had previously played a useful exchange for pawn sacrifice, though he had then missed a much stronger follow-up which might well have won. However, things are still looking good: 21 Nc5+ is strong, when 21...Ka8 is answered by 22 Bd3! and the resultant complications seem to favour White. Instead, White thought he could lure the black king into the open and win with 21 Ba6+ but let's see what happened: 21...Kxa6 22 Nc5+ Ka5 23 Nb7+ Kb6 24 Nxd8 Rxd8 25 d5+ ... when you see a discovered check resulting in a double attack on a piece at the end of your tactical analysis, you understandably get excited. But, sadly for White, his analysis ended too soon... 25...Kb7! - the only good square for the king. White resigned. The point is that 26 dxc6+ is illegal because the pawn is pinned and that 26 Rxc6 allows 26...Rxd5+ and 27...Kxc6. Life is unfair.
Posted by John Saunders at 08:33 2 comments: