Can You Solve This Crossword Clue?

There was a very good chess-related clue in today's (17 Feb) Guardian crossword...

"Chess player heard to do what Humpty Dumpty did to friend - some egg!" (7 letters)

I managed to get it but only after working out the 3rd and 7th letters from other clues. Can you work it out? I'll give you a clue in 'comments'...
Posted by John Saunders at 22:43 4 comments:

Email ThisBlogThis!Share to TwitterShare to FacebookShare to Pinterest
Labels: crossword

No Draws in Pasadena 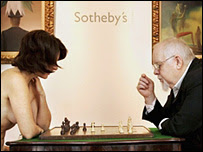 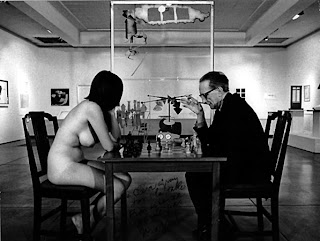 It is not generally known that the 'no draws before move 40 rule', far from being a 21st century invention, was first applied in Pasadena in 1963. However, at the time, it caused a lot of confusion amongst competitors. Eve Babitz, shown in the photo (top right) playing Black against world-famous artist Marcel Duchamp, admitted later that she had completely misinterpreted the tournament director's instruction that there were to be no draws before move 40.

Seriously, though... Julian Wasser's photo of Babitz and Duchamp playing chess, taken at the Pasadena Museum of Art in 1963, has become very famous. So much so that British artist Sir Peter Blake recently recreated it at Sotheby's in London, in advance of a major auction of surrealist art. Amongst the sale is Duchamp's chessboard, created in 1946. Sothebys estimated that it would sell for between £180,000 and £250,000. The photo (top left) shows artists' model Carol Holt playing against Blake.

Welcome to my new blog

This is the first post of my new blog. I'm in the process of migrating from my old blog at http://uk.360.yahoo.com/bcmchess which had certain limitations. I'm busy producing the March issue of British Chess Magazine at present, so there will not be much content for a few days yet.
Posted by John Saunders at 14:40 No comments: