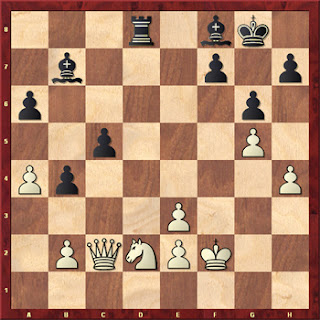 This is a position from Shirov-Aronian, Game Two, with Shirov (White) to play. I looked at this briefly with Fritz 10 yesterday and noted that the software program strongly preferred 33 Ne4 to the move played, which was 33 Nc4.

This morning I read Mihail Marin's report on chessbase.com and was a bit surprised to find that he had skipped over this position without a comment.

So, was this a case of culpable negligence by Shirov (and Marin)? At first I thought so, but then looked closer. I also fed the position into a number of other chess engines (including Rybka 2.1, Hiarcs 10, Shredder 10). They all preferred 33 Ne4 to the move played. But then it dawned on me: if, after 33 Ne4, Black plays 33...Bxe4 34 Qxe4 Rd6, how can White ever win? Black is going to put his rook on e6, his king on g7 and then play Be7, Bf8, Be7 ad infinitum. Everything is defended. The white queen can go anywhere she wants but, without an attacking accomplice, cannot force a breakthrough with pawns or the king, and as far as I can see there is no potential zugzwang.

The finely-honed brains of Shirov and Marin would have figured this out pretty quickly, I guess. But it is a good example of software not being able to see the big picture. The human player sees the ideal placement of the black pieces to defend everything plus an adequate 'pass move' sequence to avoid zugzwang. Then a quick scan of the white side reveals no plausible breakthrough possibility.
Posted by John Saunders at 13:30