As I mentioned in my last blog post, I'm spending more of my time as a chess detective these days, with a view to updating the game files on BritBase. That link should take you to the Britbase 'What's New' page where you should find a sudden spurt of activity around August/September 2015 after a relatively long fallow period.

A by-product of my digging for old game scores is the odd historical snippet. I sometimes post these to the Chess History section of the English Chess Forum but some of the things I find are perhaps a bit too long or involved for a forum post.

So I propose to share them here on my hitherto largely neglected blog. Here are the first three such snippets. They won't necessarily be written in flowing prose: I don't intend to spend too much time turning them into the sort of finished articles that I write for CHESS Magazine; they may be little more than notes of facts and information, with a view to sharing information with other chess history researchers.

Kate Belinda Finn's claim to chess fame is that she was the first British Chess Federation Ladies' Chess Champion in 1904 and she retained her title in 1905. The important piece of new information here I'm imparting is her date of birth, which has hitherto been quoted as 1870. 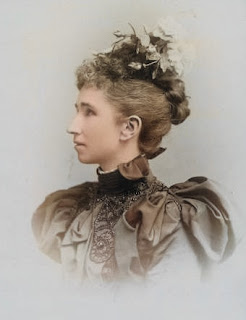 Kate Finn as she was in 1897 (photo colorised by John Saunders)
Her entry in Jeremy Gaige's Chess Personalia (McFarland, 1987) reads as follows:

BCM, April 1932, pps 166-167 wrote:Miss K. B. Finn, first British Lady Champion and one of the strongest women players of her day, died of bronchial pneumonia on March 8 [1932] at 12 Rugby Mansions, Kensington. She was the only daughter of the late Eugene Finn, M.D., of Patricks Hill, Cork. Her mother, who died in 1906, was fond of chess, encouraged her daughter to play and accompanied her to the various meetings. When the British Chess Federation was formed in 1904 she entered the Ladies’ Championship at Hastings and won with a score of 10½ out of 11, a wonderful performance. In the following year, at Southport, she again won the trophy, but the opposition was keener, her score being 9½. In neither event did she lose a game, the points she dropped being the result of drawn contests. Her mother’s serious illness prevented her from appearing at Shrewsbury in 1906, and as events turned out, she never again competed, but her strength a first-class player was maintained till quite recently, when ill-health and failing eyesight made her appearances more rare. For years she played top board for the original Ladies Chess Club, which then played in the “A” Division of the London League. Here she held her own with the leading London players. Latterly she joined the Imperial Chess Club, and was a regular and valued attendant.

And the Times reference is as follows:

Neither mentions her age or date of birth. But Ancestry reveals a birth registration as Catherine Belinda Finn on 16 December 1864, Cork, county of Cork, Ireland, parents Eugene Finn and Belinda (née) McCarthy, who were married on 30 Jan 1864 in Cork. Eugene was the eldest son of James Finn, esq, Kanturk [town in the NW of county Cork], and Belinda was the youngest daughter of Dr McCarthy, Newcastle, County Limerick.

In 1901 Kate Belinda Finn was living (on her own means) at a salubrious address in Kensington with her widowed mother Belinda. Her age was given as 34, which is out by two years (should be 36). Her mother died in 1906 and I can't find Kate in the 1911 census, nor as yet in the censuses prior to 1901. Tim Harding has pointed out that she may still have been abroad at the time of the 1911 census as she played in (and won) the 1911 San Remo Ladies' International.

£6,000 looks quite a tidy sum for those days. I think that John Finn was her (younger) brother. He spent a lot of time abroad and I suppose it is possible Kate did also, either with him or somewhere warm, for the sake of her health, which might explain where she was in 1911.

The BCM obituary comment that "she never again competed" is a bit misleading as it is quite clear she carried on playing club chess for the rest of her life. References to her appearances for the Imperial Chess Club can be found in the Times. One of her last recorded appearances was in a rather grand match played on board the Union Castle passenger liner Llangibby Castle moored in Royal Albert Dock in London in 1930. (Ref. The Times (London, England), Wednesday, May 21, 1930; pg. 14; Issue 45518.) Mir Sultan Khan played on top board and only drew against W.Veitch - who may have been related to the Walter Veitch (1923-2004) who played in the 1950 British Championship, etc. The older Veitch was referred to as "of Union Castle".

I've since found a couple of Times in memoriam notices for Kate Finn, on the anniversary of her death in 1934 and 1935, in both cases signed "J.F. and E.M." - presumably her brother John Finn and her friend and flat-mate Eileen Moriarty.

Here is a game which Kate Finn won at the 1905 British Championship in Southport. The Manchester Guardian was coy about giving Black's name, for some reason.
By the way, you may note that Kate Finn's last home, Rugby Mansions, is in Bishop Kings Road in W14 - rather a wonderful road name for a chess player. And, equally wonderfully, this is but a stone's throw from where the London Chess Classic is played.
Some of the content of this post first appeared on the EC Forum on 29 August 2015.
Posted by John Saunders at 15:50