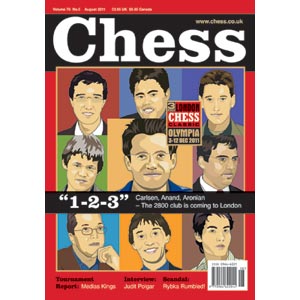 The August CHESS Magazine is out now. Buy it here.

The UK's most popular and comprehensive chess Magazine, established 1935. All the regular features plus the following ...
Plus all the usual features and more besides
To order a copy of the August 2011 CHESS Magazine, click here