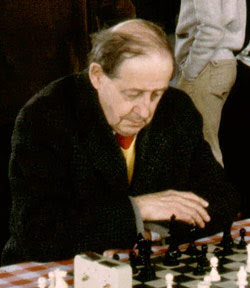 I've just received a most interesting message from Leonard Barden, who tells me about an occasion when 5½/6 in the first week wasn't good enough to win the British Championship. It was in 1948 when the championship was played at the Bishopsgate Institute in London - in fact, this was the last time the championship was ever held in London.

The unlucky man was BH Wood (see photo), founder and editor of Chess magazine. In the first week, he won his first five games (versus W Winter, RH Newman, W Ritson Morry, G Wood, CHO'D Alexander) and then drew with reigning champion Golombek in round six (a spooky parallel with 2007 - I hope Aagaard isn't superstitious). His second week started well with a win against JM Aitken, but then it all fell apart: 0 v G Abrahams, ½ v Sir George Thomas, 0 v PS Milner-Barry, 0 v RJ Broadbent. That left Broadbent the winner on 8½, while BH Wood was in a multiple tie on 7. But BH could have won the title had he won that final round game.

Those are the facts. Here is Leonard's commentary:

"BH Wood had paid for several weeks of special training beforehand from Paul Schmidt (who had been No. 2 to Keres in 1930s Estonia and held his own with Alekhine, Bogolyubov and Junge in German wartime events) and had some sharp theoretical lines prepared. He was impressive in the early rounds, much to the dismay of Golombek."

"In the second week BH got nervous and dropped a few points, but he was still only half a point behind Broadbent at the start of the final round. BH was worse, then he had a late opportunity to win game and title, then he blew it."

"I guess if BH had won with the extra kudos from being champion at that time it might have sunk the BCM, since both BCM and Chess were struggling financially at the time."

"I can vouch that 5/6, which I had in 1954, 1957 and 1958, is a psychologically vulnerable score. I recall Penrose asking me meaningfully as we went for a stroll during the weekend at Plymouth 1957 'What does it feel like to be leading the championship at the end of the first week?' The answer: a burden. You have the free day on Sunday to fret and Sunday night to be sleepless..."

"I watched the 1947 and 1948 all-play-alls (controversies with selections, exclusion of young talents) and competed in the first Swiss in 1949. Those early Swisses around 1950 were strictly limited to 32 players and I think they were the best answer, very competitive events with hardly anybody outclassed. It's the later expansion to fields of over 50 players which has caused the imbalance."

Many thanks to Leonard for letting me use his comments on my blog. It's great having a former British Champion contributing to the debate. The reference to the 1948 championship reminded me that Bob Wade had commented on this when I interviewed him for BCM back in 1999. Here's what Bob said about that cataclysmic last round against Broadbent (Bob, like Leonard, was in the room and saw it happen). "There was a famous last round where the establishment were terribly worried that BH Wood had a winning position - but then he got flustered and blundered..." At that point I asked Bob what he meant by "the establishment". He replied "Oh, BH Wood was regarded as anti-establishment by people like Alexander and Milner-Barry".
Posted by John Saunders at 23:24